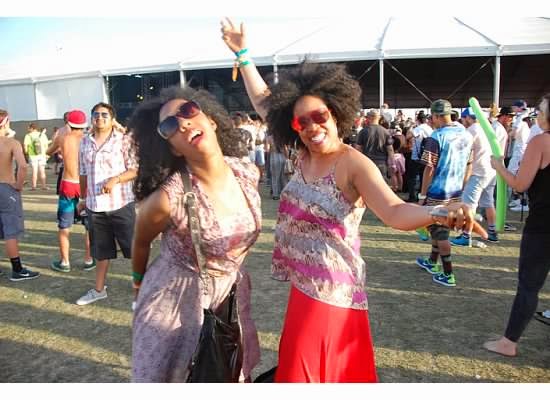 My soulmate is turning 30 this year. I'm talking about my kindred, urban hippie, science geek girlfriend soulmate. I am a firm believer that you can have soulmates that are the same sex without being homosexual. We all have those people we meet and instantly click. It's about the connection and relating with someone. She came into my life in a time of transition and turmoil. It was a relief to have someone you can talk science geek shop with candidly in a no judgement zone.

Anyway, over the years, I have become my soulmate's default date when the boys in her life aren't acting right. Extra ticket to the Raphael Sadiiq show, default soulmate date. Want to see an Indie film that no one else is interested in, default soulmate date. Need a chauffeur to the club for your birthday so you can get wasted responsibly, default soulmate date. So of course, when she said Coachella would be the first stop of her "Year of The 30" music festivals, I was praying she needed her dependable default date. ESPECIALLY since all my fav urban hippie, free spirit, artsy fartsy were gonna be there. Mainly Jhene Aiko and Solange but MOSTLY Andre 3000. I had no idea what I was getting myself into when I said "I'm going."

Coachella Set Up: There were six stages, all of this spread over about 5 acres of land at the Empire Polo Club. Two of the six were outdoor stages for the headliners to perform and four tents for independent artists and DJs. Vendors were everywhere for games, souvenirs, music, and food. There were multiple water refill stations, so people could stay hydrated in the desert heat without spending a fortune.

We arrived at the Polo Club around 4pm PST. The sun was beating down at about 100 degrees. I decided to wear gladiator sandals for the first day. Obviously, I did not read the website on what not to wear because gladiator sandals and desert sand/dirt was ALL wrong. Especially considering we were walking at least 3 miles per day and standing for about 8 hours. We rush over to the stage A$AP Ferg. That performance was cut short though. Something about him arriving late and being intoxicated. Typical. We go over to a tent and watch Bastille. My first taste of mosh pit. Wasn't feeling it. Around 6pm, we shoot over to the main stage in preparation for Outkast's 11:05pm performance. Ellie Golden was performing as we "excuse me'd" our way to thee VERY front. Then Chromeo came out and rocked it. 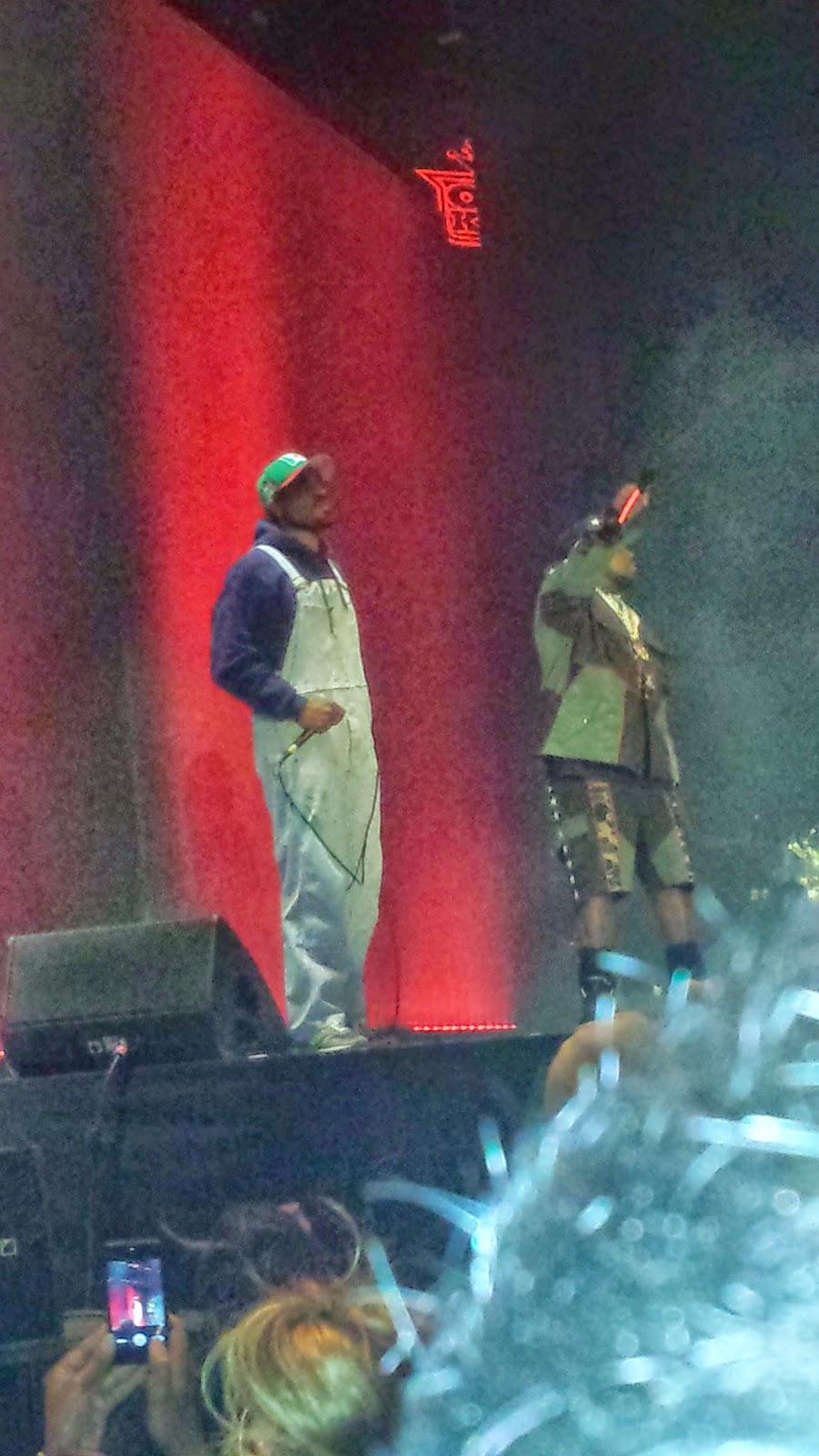 the party started. I had no idea who Girl Talk was, but now I do. He's like the most bomb dj I've EVER partied with in life. He was mixing all this old hip hop with cool rock and pop beats. But when we started bringing the rap artist out to actually perform the lyrics.....listen, Linda. You ain't lived unless your heard E40 grunt or Too Short say "BEYOTCH!!!". And then, of course, OUTKAST!!! I missed them together so much. Well, I missed Andre. I just like to look at Big Boi. Day 1 was bomb dot com. I'm not gonna discuss the shuttle disaster and the adventure we had trying to get home. Let's just say, we were refunded some coins at the end of our trip.

We woke up sore. Like our entire bodies sore. Arms. Back. Abs. Butt. Calves. Ankles. Ball of feet. Heels. EVERYTHING. Mosh pit life ain't for the faint of heart. We are not quitters though. So, we limped down to the hotel lobby to partake in the breakfast buffet, took our ibuprofen and hit the shuttle to do it one more day. We were not fully prepared for the sandstorm we'd have to endure. Our Coachella apps sent a "High Winds Warning" notification, however, what we experienced was, clearly, a sand storm. The dirt, dust, and sand was so thick in the air because of the wind that the sky looked like dense fog in the distance. 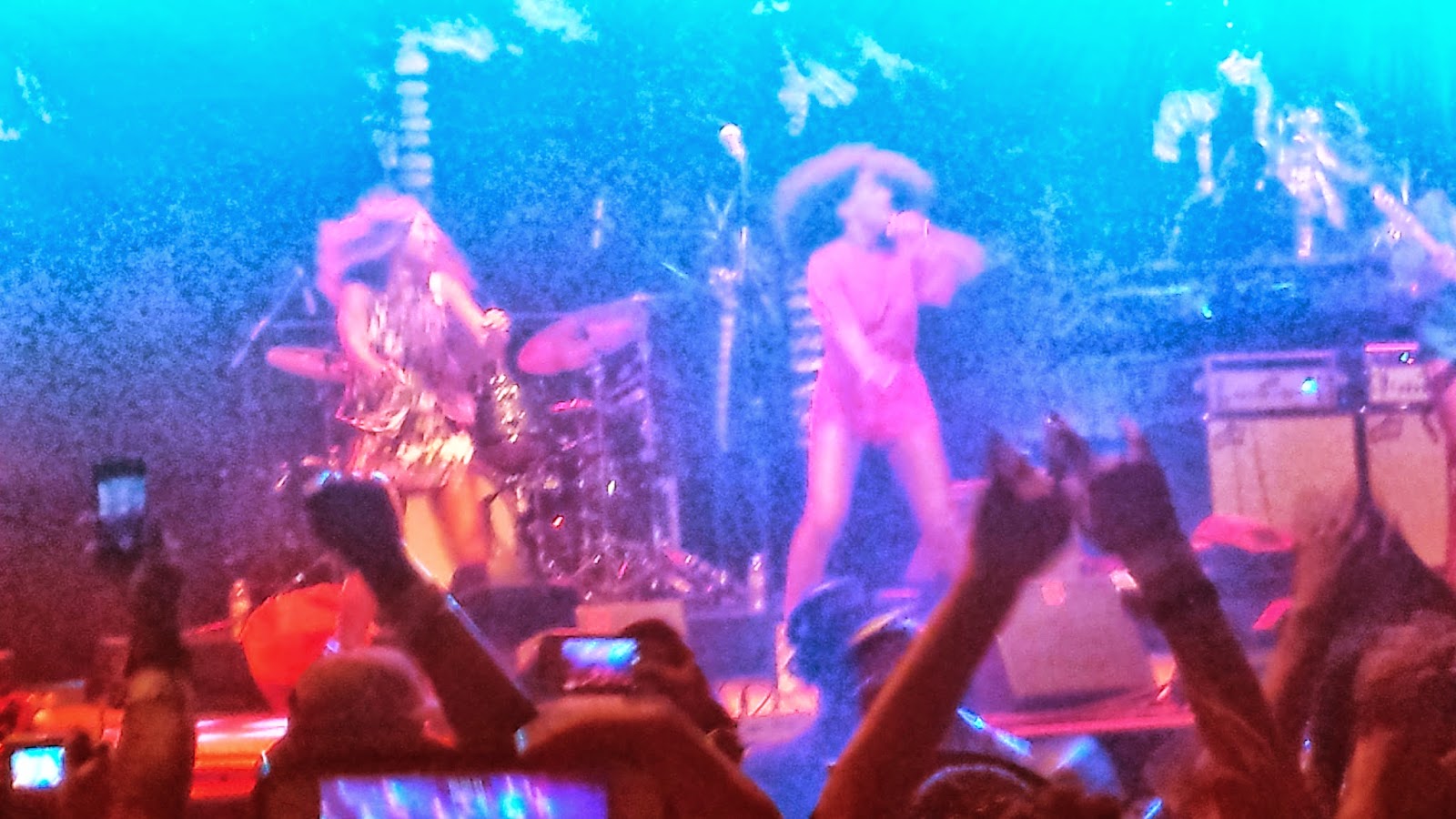 We made it in time to see Banks. Then set up shop in the grass for Kid Cudi. After eating, we went to see a few songs by Lorde but decided we needed to get in the mosh pit for Solange's performance. We were praising Jehovah for a reprieve from the outdoor stages and wind. We made our way to a good spot. I was able to get some great shots of her. But when Beyoncè came out to dance with her. We! Lost! It! They are so cute. I love sisterly love. Still on our Beyoncè high, we brave the wind again for Queen of the Stone Age. My soulmate was wearing shorts, poor thing. She couldn't take the sand hitting her legs and finding its way into her contacts. We punked out and left at 10:30pm. We missed Pharrell and Nas. We were alright with that though, because we got to see Beyoncè. You win some. You lose some.


Day 3:
Security was thick. Of course, it was the day I was trying to smuggle our unfinished hotel liquor cuz Fancy don't pay no retail liquor prices. Got to the front of the "pat down" line and the male security told me he couldn't search me and was trying to direct me to the militant, drug sniffing, doing the most female security officer's line. No way, Jose. I looked at him and said "No. You can search me." He laughed and asked me to take my stuff out of my book bag but whispered "If you have liquor, don't take it out." Hahahahahahahaha!!

We made it just in time to experience Chance the Rapper's fancy feet. We set up shop in the grass, under a tent for the Frank Turner performance. Frank Turner had us mellowed out and we were able to cool off for a little bit before we went into negotiation mode. We needed souvenir shirts but we were not about to pay $30 for a tank top. We ended up getting 4 for $75. Hmph! Feeling good about our purchase, we checked AlunaGeorge for a little bit but had our eyes on the Sephora tent. We were baffled by the line for Sephora entry because there wasn't much going on in there so we decided to make a bee line to the Samsung Galaxy tent but not before rocking out a little to DJ Flosstradamus. The party in that tent was EPIC! 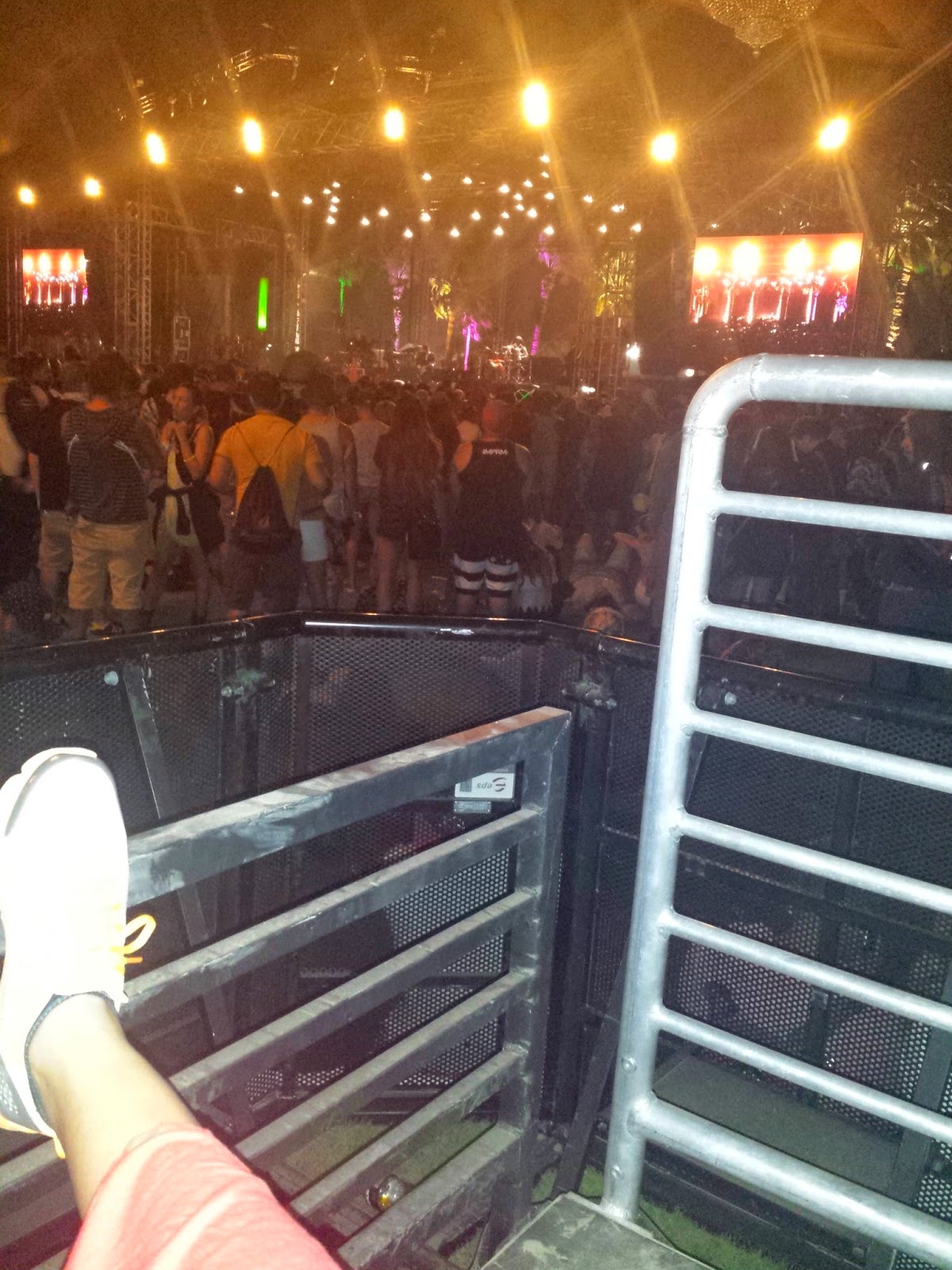 When we finally danced our way into the Samsung tent. There we played with tablets, made videos, took pics, AND, most importantly, won $5 food vouchers. Woop Woop! After eating we stopped by the Jhene Aiko tent, ya know, just to stake it out early but there was some English bar music band playing in it. Never heard of The Toy Dolls before but the crowd was going crazy. And by crazy, I mean, just running in circles and stomping their feet. So, we didn't stick around long for that. On our way out, my soulmate decided to try our luck with security. We needed seating for this last show. We were worn out. We had to see Beck at 8:55pm before Jhene Aiko performed at 10pm. Negotiations seemed to go well but we wouldn't know the true results until we came back from the Beck performance on the main stage. When we came back at around 9:45pm, what do you know? They kept their word, VIP seating for the last show of the weekend, Jhene Aiko. She was awesome in all her urban hippie glory. Even brought out Childish Gambino and Drake.

Overall, we survived our first Coachella and we had a friggin ball! We saw 16 artists/bands perform. We learned about some music and DJs that we hadn't heard of before. There were multiple celebrity sightings. We ate good. We exercised. We booked an extra 2 days to actually see a little Palm Springs and relax after all of the Coachella riff raff.